Deepika Padukone had taken over as the chairperson of Mumbai Academy of the Moving Image (MAMI) in 2019. She had replaced filmmaker Kiran Rao.

Actor Deepika Padukone has decided to ‘depart’ from the duties of being a chairperson of Mumbai Academy of the Moving Image (MAMI). The actor, who took over the position in 2019, stated her “slate of work” as the reason to why she took the step. Deepika, calling the experience as ‘enriching’, stated that her bond with MAMI ‘will last a lifetime’.

On Monday, the actor took to her social media platforms to share the news. “Being on the board of MAMI and serving as chairperson has been a deeply enriching experience. As an artist, it was invigorating to bring together cinema and talent from all over the world to Mumbai, my second home.

I have come to realise however, that with my current slate of work, I will be unable to give MAMI the undivided focus and attention it requires. I depart knowing that MAMI is in the best hands possible and that my bond and connection with the academy is one that will last a lifetime,” she wrote in a note. 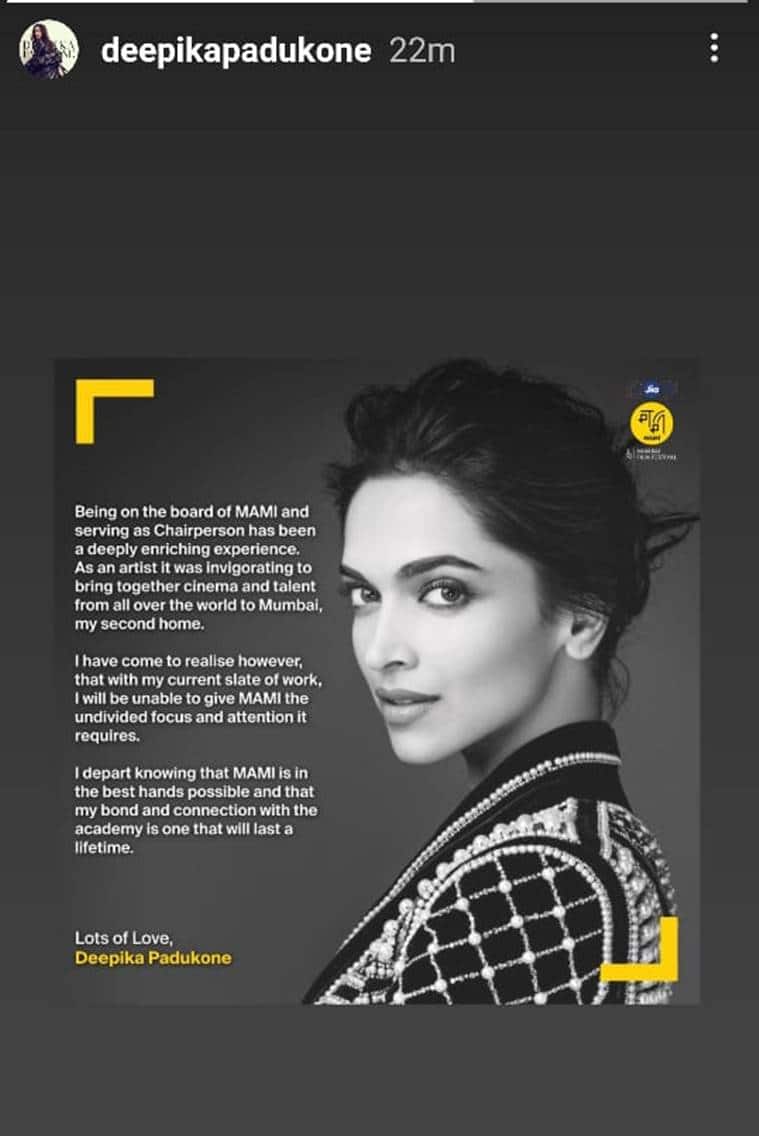 At MAMI 2019, Deepika made her first appearance as the film festival’s chairperson.

During her opening statement, she said, “Cinema has the power to make us less lonely when we are. In the age of digital streaming and social media that is slowly but surely is isolating us, the Mumbai Academy of Moving Images (MAMI) binds us without boundaries, inhibitions and most importantly without fear. As an artiste who truly believes in the power of cinema, I say we need this more than ever before.”

On the work front, Deepika will be seen in a special role in Ranveer Singh’s 83. She is currently shooting for Shakun Batra’s untitled project, which also stars Ananya Pandey and Siddhant Chaturvedi. Deepika also announced The Intern’s official Hindi remake in which she will star opposite Amitabh Bachchan. The two had earlier worked in Piku.