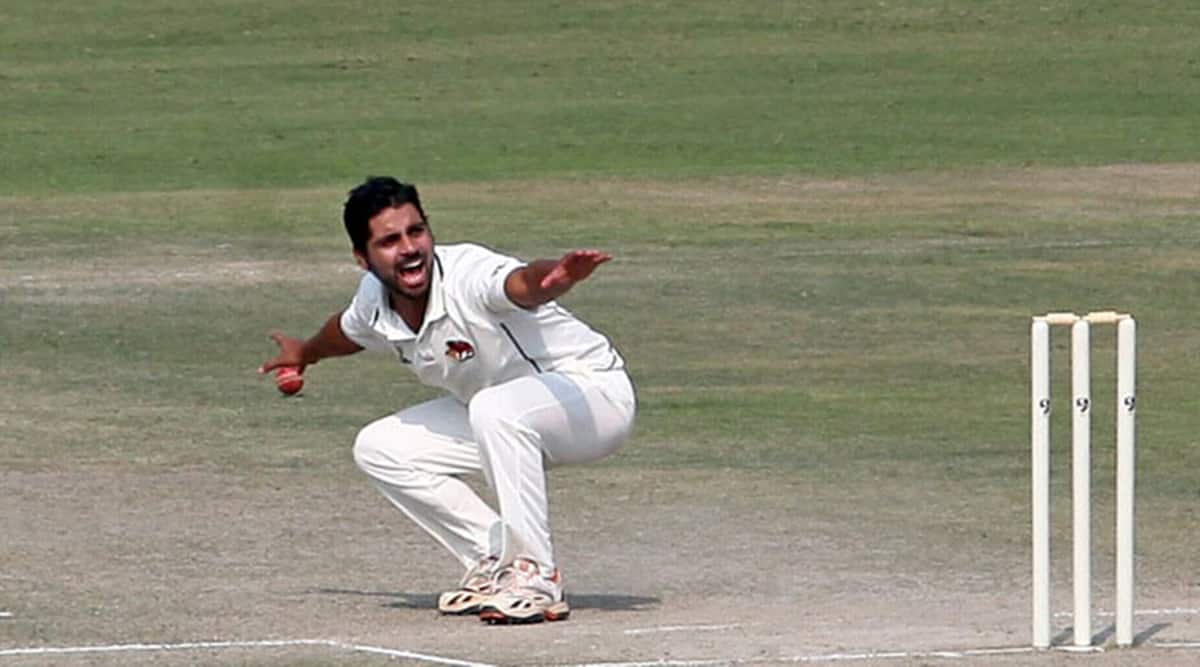 Iqbal Abdullah on Thursday claimed that he had the team manager’s permission to invite a maulvi to the dressing room (Source: IE)

Uttarakhand left-arm spinner Iqbal Abdullah on Thursday claimed that he had the team manager’s permission to invite a maulvi to the dressing room for leading the Friday namaaz during last month’s training session in Dehradun. The maulvi’s visit has come under the scanner in wake of Uttarakhand coach Wasim Jaffer’s resignation and subsequent allegations that he had “communalised” the team atmosphere and even played a part in breaking the bio-bubble protocol.

The former India opener had alleged that officials and selectors of the state association were pushing for the inclusion of “non-deserving players” in the team.

The day also saw Cricket Association of Uttarakhand (CAU) secretary Mahim Verma, through a press release, informing that team manager Navneet Mishra had been asked to file a report on the alleged bio-bubble breach. While the CAU secretary, on Wednesday, had said that he had been informed by the players that Jaffer had invited the maulvi, the former Test opener claimed that it was Abdullah who had floated the idea. Abdullahh said he had the manager’s permission for inviting the maulvi.

“We cannot offer Friday’s namaaz without a maulvi. We offered namaaz only when our practice got over at around 3:40 pm. I first asked Wasim bhai if I could call the maulvi for prayers. He told me to get permission from the team manager. I spoke to manager Navneet Mishra and he said, ‘koi nahi Iqbal, prayer-dharm first (no problem, prayer and religion is most important).

The manager gave me the permission and that is why I asked the maulvi to lead the prayer,” he told.

In a press statement, CAU said they have “taken cognisance of the seriousness of the Wasim Jaffer incident”. It added, “We are already questioning the manager about the bio-bubble breach and will take action against any person / support staff responsible for the breach as players’ health safety is paramount for us.”

Questioning the existence of the bio-bubble, Abdullah said that the maulvi was called twice. “If the bio-bubble was in place, would the team manager have given me permission to call the maulvi? If the manager had said ‘no’ I would not have called the maulvi,” he said.

Abdullah, an u-19 World Cup winner, said he was pained to see a player of Jaffer’s stature facing such serious allegations.

“Wasim bhai always put the team first and never tried to communalise the team. As a cricketer, one never wants to hear such allegations. I spoke to Wasim bhai, he is hurt. These allegations are being made to divert from real issues.”

He also brushed aside the other allegation against Jaffer about him not allowing the players to chant ‘Rambhakt Hanuman ki Jai’. He said that the team had several chants during the camp and that’s why Jaffer asked the team to stick to one that had ‘Uttarakhand’ in it.

‘Should be joint call of Centre, states’: FM Sitharaman on petrol,...

‘Should be joint call of Centre, states’: FM Sitharaman on petrol,...