After seven months in space, NASA’s Perseverance rover overcame a tense landing phase with a series of perfectly executed maneuvers to gently float down to the Martian soil. 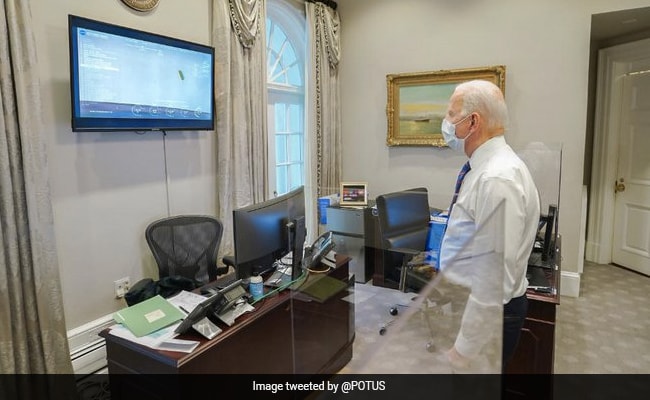 Joe Biden hailed the “historic” landing of the Perseverance rover on Mars.

Washington: US President Joe Biden on Thursday hailed the “historic” landing of the Perseverance rover on Mars as proof of the power of science and “American ingenuity.”

“Congratulations to NASA and everyone whose hard work made Perseverance’s historic landing possible. Today proved once again that with the power of science and American ingenuity, nothing is beyond the realm of possibility,” he tweeted.

After seven months in space, NASA’s Perseverance rover overcame a tense landing phase with a series of perfectly executed maneuvers to gently float down to the Martian soil Thursday and embark on its mission to search for signs of past life.

The autonomously guided procedure was in fact completed more than 11 minutes earlier, the length of time it took for radio signals to return to Earth.

Shortly after landing, the rover sent back its first black-and-white images, revealing a rocky field at the landing site in the Jezero Crater, just north of the Red Planet’s equator.

More images, video of the descent and perhaps the first sounds of Mars ever recorded by microphones are expected in the coming hours as the rover relays data to overhead satellites.

During a press call, NASA Associate Administrator Thomas Zurbuchen theatrically tore up the landing phase’s contingency plan, to emphasize how well things had gone, and admitted he violated Covid protocol by hugging people because of the emotions of the moment.

Over the coming years, Perseverance will attempt to collect 30 rock and soil samples in sealed tubes, to be eventually sent back to Earth sometime in the 2030s for lab analysis.

About the size of an SUV, the craft weighs a ton, is equipped with a seven foot- (two meter-) long robotic arm, has 19 cameras, two microphones and a suite of cutting-edge instruments to assist in its scientific goals.

Before it could set out on its lofty quest, it first had to overcome the dreaded “seven minutes of terror” — the risky entry, descent and landing phase that has scuppered nearly half of all missions to Mars.

The spacecraft carrying Perseverance careened into the Martian atmosphere at 12,500 miles (20,000 kilometers) per hour, protected by its heat shield, then deployed a supersonic parachute the size of a Little League field, before firing up an eight-engined jetpack.

Finally, it lowered the rover carefully to the ground on a set of cables.

Allen Chen, lead engineer for the landing stage, said a new guidance system called “Terrain Relative Navigation,” which uses a special camera to identify surface features and compare them to an onboard map, was key to landing in a rugged region of scientific interest.

“We are in a nice flat spot, the vehicle is only tilted by about 1.2 degrees,” he said. “We did successfully find that parking lot, and have a safe rover on the ground.”

Alia Bhatt cheers for Sanjay Leela Bhansali in an INSIDE video...