Ishaan Khatter’s birthday greeting arrived with a priceless throwback, featuring a baby version of himself playing with a much younger Shahid Kapoor, whose smile lights up the entire screen. 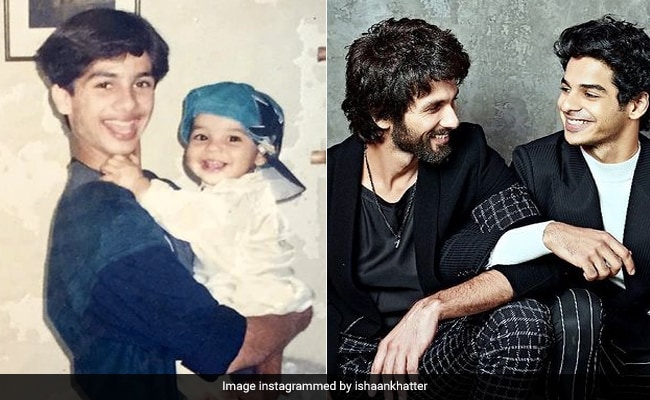 New Delhi: Shahid Kapoor’s birthday celebrations began at midnight, courtesy of the actor’s brother Ishaan Khatter. Sharing a then and now post, Ishaan added a rather filmy birthday wish for Shahid – he borrowed lyrics from Rajesh Khanna song from Anand and wrote: “Zindagi kaisi hai paheli haaye. Kabhi toh hasaaye, kabhi yeh rulaaye. But through it all… I’ll always love you, bade bhai. Happy birthday.” Aww, we are not crying, you are. Ishaan Khatter’s birthday greeting arrived with a priceless throwback, featuring a baby version of himself playing with a much younger Shahid Kapoor, whose smile lights up the entire screen.

Here’s how Ishaan Khatter made his bade bhai‘s birthday special:

Shahid Kapoor is the son of Pankaj Kapur and his former wife Neelima Azeem. Ishaan Khatter was born to Neelima Azeem and actor Rajesh Khattar in 1984.

On Ishaan Khatter’s birthday in November, Shahid Kapoor sent out a heart-warming greeting on Instagram, writing: “Happy birthday Ishaan. May you be everything you deserve to be. Loads of love.” In the comments section, Ishaan replied: “I love you Bhai. Your blessings mean the world to me. Your light is the brightest and I’m lucky to soak it in.”

Ishaan Khatter made his acting debut with Iranian filmmaker Majid Majidi’s Beyond The Clouds. He stepped into Bollywood with 2018 movie Dhadak. Last year, he co-starred with Ananya Panday in action comedy Khaali Peeli. Ishaan Khatter’s upcoming film is Phone Bhoot, in which he co-stars with Katrina Kaif and Siddhant Chaturvedi.

In terms of work, Shahid Kapoor will next be seen in Jersey, which is all set to hit screens on Diwali this year – November 5. Jersey will have a theatrical release.