PM Modi expressed that he’s proud to dedicate to the country one more warrior to protect India’s frontiers. “I am proud to handover the indigenously designed and manufactured ‘Main Battle Tank Arjun Mark 1A’. It also uses indigenous ammunition. Tamil Nadu is already the leading automobile manufacturing hub of India,” PM said. 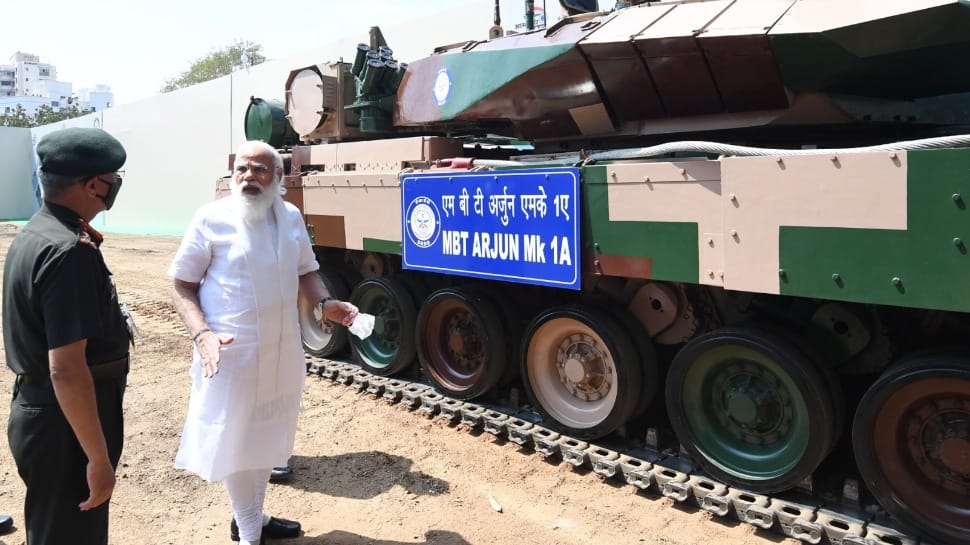 New Delhi: PM Narendra Modi on Sunday (February 14, 2021) visited Tamil Nadu ahead of the state’s Assembly elections and said that it is evolving as a Tank manufacturing hub of India.

Prime Minister Modi inaugurated and laid the foundation stones for several key projects and handed over the Arjun Main Battle Tank (MK-1A) to the Army in Tamil Nadu’s Chennai.

He said, “Today, I am proud to dedicate to the country one more warrior to protect our frontiers. I am proud to handover the indigenously designed and manufactured ‘Main Battle Tank Arjun Mark 1A’. It also uses indigenous ammunition. Tamil Nadu is already the leading automobile manufacturing hub of India.

“Now, I see Tamil Nadu evolving as the Tank manufacturing hub of India. A tank made in Tamil Nadu will be used in our northern borders to keep the nation safe. This showcases India’s united spirit – Bharat’s Ekta Darshan.”

PM Modi added, “We will continue working to make our armed forces one of the most modern forces in the world. At the same time, the focus on making India Aatmanirbhar in the defence sector moves with full speed.”

PM said that the country’s armed forces signify India’s ethos of courage and expressed, “They have shown time and again that they are fully capable of protecting our Motherland. Time and again they have also shown India believes in peace. But, India will protect our sovereignty at all costs.”

The Prime Minister said that he’s happy to be in Chennai and thanked the people of the city for the warm welcome they gave him on Sunday.

“This city is full of energy and enthusiasm. It is a city of knowledge and creativity. From Chennai today, we begin key infrastructure projects. These projects are symbols of Innovation and Indigenous development. These projects will further the growth of Tamil Nadu,” PM said.

Prime Minister Modi also expressed, “It is our honor to work towards preserving and celebrating the culture of Tamil Nadu. The culture of Tamil Nadu is popular globally. Today, I have a delightful message to convey to the Devendrakula Vellalar community sisters and brothers in Tamil Nadu. The Central Government has accepted their long-standing demand to be known as Devendrakula Vellalar. They will now be known by their heritage name and not the six to seven names listed in the Schedule to the Constitution.”

PM also met Bangaru Adigalar and said that it was an honor to interact with him. “His efforts to serve society are inspiring,” PM Modi said.

PM Modi’s visit comes ahead of the much-awaited Tamil Nadu assembly polls, which are likely to take place in April or May.

In the Tamil Nadu assembly elections 2021, the Bharatiya Janata Party (BJP) will continue its alliance with the All India Anna Dravida Munnetra Kazhagam (AIADMK). This is to be noted that the AIADMK had allied with the BJP, as a part of the NDA to fight the 2019 Lok Sabha elections.

ILO Report: Indians Work The Longest Weekly Hours And Have The Lowest Wages