As internet services remained suspended in and around the Singhu border protest venue for the third consecutive day, farmers alleged that the step was taken to stop their voices from reaching the rest of the world.
By karn pratap singh, New Delhi 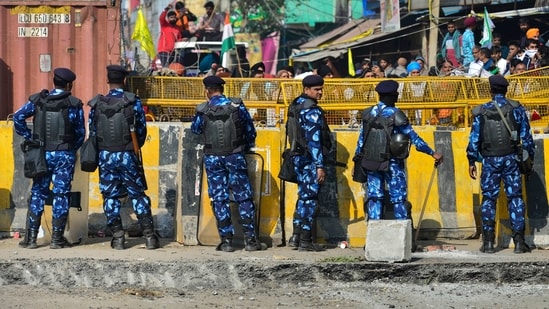 Apart from farmers, people travelling between Delhi and Haryana also faced problems because of the police blockade.(PTI).

With increased deployment of security personnel, four-layered barricading on the main highway connecting Delhi with Haryana, and trenches dug up on the adjacent roads, the Singhu border protest site’s connectivity with the Capital remained snapped throughout Sunday, leading to disruptions in supplies and movement of people.

As internet services remained suspended in and around the Singhu border protest venue – thousands are agitating against three contentious farm laws at the site – for the third consecutive day, farmers alleged that the step was taken to stop their voices from reaching the rest of the world.

“It (the government) wants to spread its false spin around farmers. It is also fearful of the coordinated work of the farmers’ unions across different protest sites and is trying to cut off communication means between them. This is undemocratic and illegal,” Samyukta Kisan Morcha (SKM), the umbrella body of 40 farmers unions that are part of the agitation against the three contentious farm laws, said in a statement on Sunday.

Also read: Ready for talks but not under pressure, says Rakesh Tikait

As per the government’s order, internet services at three borders points – Singhu, Tikri and Ghazipur – were suspended from January 29 till 11pm on Sunday. The police denied allegations that the Singhu area was completely cut off, saying that movement and supplies of essential items continued through alternative routes.

“As the police have blocked all the roads and sub-lanes and are not allowing us to cross over, we have not been able to use the portable toilets or the water tankers arranged by the Delhi government since yesterday (Saturday). We are now completely dependent on the toilets and water supplies of local residents,” said Dilbagh Singh, a farmer from Punjab’s Sangrur, who has been running a langar at the border point, close to the police’s barricades.

Questioning the cordoning off of the protest sites, the SKM said it was being done to disrupt basic supplies such as food and water. “All these various attacks of the government are recognised by us as such, and we condemn the same,” read the SKM’s statement.

Apart from farmers, people travelling between Delhi and Haryana also faced problems because of the police blockade.

“I have walked more than four kilometers in the fields and through the local villages just to cross the Singhu border. It’s the farmers and local residents who helped me with the alternative routes. There is police everywhere and barricades on every entry-exit point,” said Sunil Sabbharwal, who was coming to Delhi from Karnal and carrying his luggage on his head.

Reacting to the farmers’ allegations, senior police officers said that while the connectivity between Delhi and the Singhu border was stopped through the main highway, they diverted the traffic and supplies of essential items through alternative routes.

An officer said that the security and barricading was tightened following the conflict between the farmers and local residents witnessed on Friday and Saturday over the issue of clearing the roads, and the violence at the Red Fort and other places in Delhi on January 26.

The farmers’ protest at the Singhu, Tikri and Ghazipur borders against the farm laws entered the 68th day on Sunday. On Republic Day, farmer groups broke through barricades, clashed with the Delhi Police and stormed the Red Fort, hoisting the Nishan Sahib, the flag of the Sikhs, on its ramparts.

“We have beefed up the security to avoid any further clashes between the farmers and the locals, who say that their businesses have been affected for over two months due to the agitation. Also, many protesters armed with sticks, swords, and other sharp weapons are roaming around. It is another reason why we have increased the police presence. The supplies of the farmers at the Singhu border from Delhi are being allowed through the alternative routes,” said Sanjay Singh, special commissioner of police (law and order, west zone).

The crowd at the Singhu border continued swelling throughout Sunday as hundreds of farmers, mostly from Punjab and Haryana, arrived on tractors and other vehicles with ration, water, vegetables and other supplies. The protesters also ramped up vigil at the protest site and volunteers carrying sticks were seen taking regular rounds in the backdrop of Friday’s violence and Saturday’s protests by people claiming to be locals.

Explained: Why Facebook is restoring news sharing in Australia

Over 30,000 Apple Macs have been infected with a high-stealth malware, and the company has no idea why