Averting a major accident, the all-women Railway Protection Force (RPF) team of Waltair Division, on 8 February, rescued a passenger falling under a moving train, at Vizag Railway Station. The incident came to light when the screenshots from the rescue operation were released by the RPF Waltair Division team on their social media handle.

According to sources, a passenger identified as Srinivas Rao, reached the station, on Monday morning to board the Visakhapatnam-Hyderabad Godavari Express. Just as he attempted to catch the running train, the locomotive picked up speed. In a shocking turn of events, Mr Rao slipped and was about to fall in the gap between the track and platform. 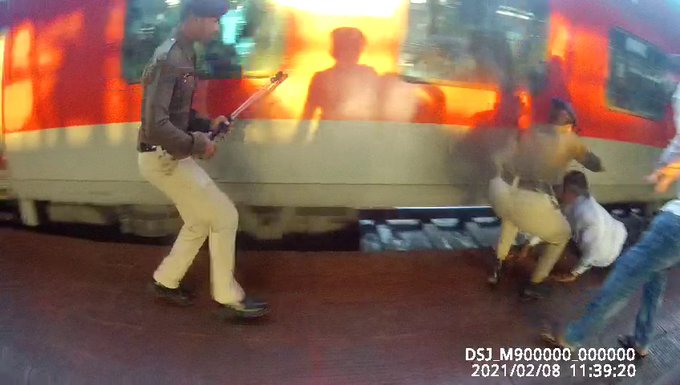 In a swift response, the RPF team from the ‘Meri Saheli’ programme saved the commuter from falling under the wheels of the moving train at Vizag Railway Station. The rescue team comprised of Sub-Inspector V Keerthi Reddy, new recruits K Padmavati and KM Shobha, and patrolling staff constable Manish Kumar, and constable Bhagat Singh. Reportedly, Ms Padmavati from the all-women RPF team was the first to reach the distressed passenger. Acting spontaneously, the RPF personnel pulled Mr Srinivas Rao to safety at the nick of the moment. The entire episode was captured in the bodyworn cameras of the RPF personnel.

Man hospitalised after being thrashed for sheltering dogs, strays starve for days in Bengal