Shah Rukh Khan’s wife Gauri Khan is quite active on social media. She treated fans with a super cute picture of her son AbRam on Wednesday. She went on to call him her ‘Mike Tyson’. SRK has now reacted to Gauri’s post on social media.
Gauri took to Twitter and shared the sweet picture of the star kid. In the picture, he was seen sporting a grey T-shirt with his messy hair. He was also seen wearing boxing gloves while staring at the camera with a straight face. The snap seems to be taken amid a boxing practice session.

Sharing the picture with her fans, Gauri wrote, “My Mike Tyson” followed by heart emoji. To this, SRK replied, “Arre yaar!!! Where was I ???” Have a look: 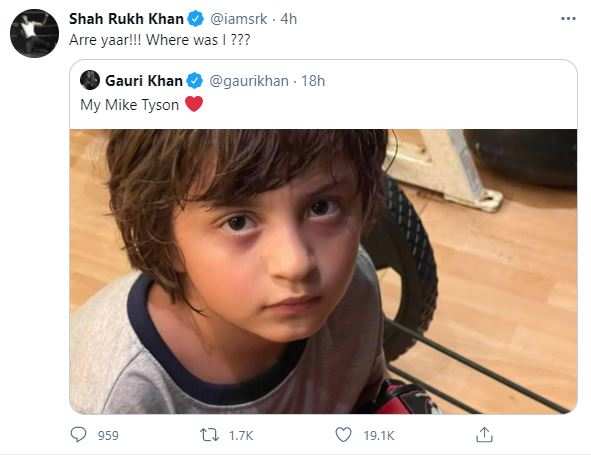 Earlier, the superstar has graced AbRam’s sports day and his Karate classes. Their pictures also went viral on social media.

Meanwhile, SRK is reportedly busy shooting for his next titled ‘Pathan’ in the city. It is reported that Deepika Padukone and John Abraham are all set to join him soon. The film has not been announced officially. But the pictures and videos of SRK from the sets go viral on the internet every now and then. Apart from this, it is also rumoured that the actor has Rajkumar Hirani’s next in his kitty. He is yet to make an official announcement. His fans are quite excited to watch him on the big screen after almost 2 years.

Kangana Ranaut drags Alia, Taapsee after not getting tagged in Tanu Weds Manu anniversary posts while Swara Bhasker did