New Delhi: The Delhi Police on Friday arrested 44 people for violence at Singhu border following a clash between farmers and a large group ‘local’ residents.

The Delhi Police said among the people arrested is 22-year-old Ranjeet Singh from Punjab, who attacked SHO (Alipur) Pradeep Paliwal with a sword. He has been charged with attempt to murder and obstructing public servant. 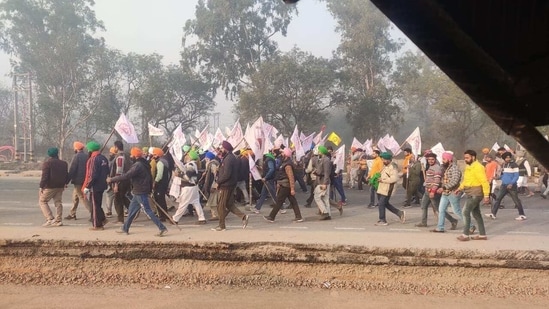 Trouble began at around 1.30 pm on Friday, when nearly 200 people from local villagers reached the Singhu border and demanded that the protesters vacate the area and open the border.

“They said that they have been providing all kind of help to the protesters for the last two months but now the protest is affecting their livelihood. Hence, they requested them to vacate the road. They had come on Thursday as well with the same request,” Additional Delhi Police PRO Anil Mittal told PTI.

There was resistance from some farmers which led to pulling and pushing of barriades and then the groups started pelting stones.

The police had to fire tear gas shells and resort to baton charge to break up the clash at Singhu border which turned violent with people hurling stones at each other.

In the violence, SHO Paliwal was attacked by Singh, who was overpowered and apprehended at the spot. The SHO sustained grievous injuries and five other police personnel were also injured, a senior police officer said.

However, the protesters have claimed that those who visited the protest site were not locals but goons armed with sticks.

Explained: Why Facebook is restoring news sharing in Australia

Over 30,000 Apple Macs have been infected with a high-stealth malware, and the company has no idea why