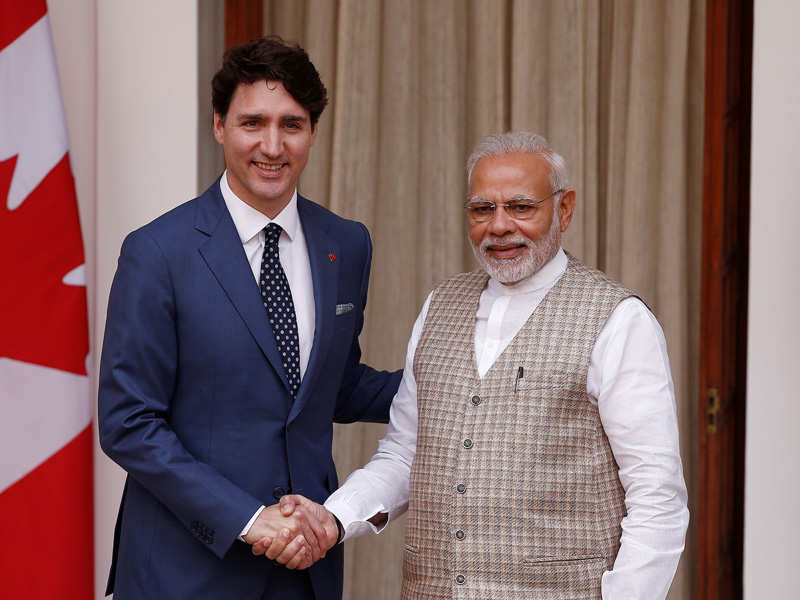 NEW DELHI: Canadian prime minister Justin Trudeau, who has been critical of the Indian government on the farmers’ protests, called Prime Minister Modi to request for Covid vaccines.
In a late evening tweet, Modi said, “Was happy to receive a call from my friend @JustinTrudeau. Assured him that India would do its best to facilitate supplies of Covid vaccines sought by Canada. We also agreed to continue collaborating on other important issues like Climate Change and the global economic recovery.”

Canada has asked for 1 million doses of Covid vaccines from Serum Institute. While this would be a commercial purchase, the government would have to grant export clearance, which India has said it would do keeping domestic considerations in mind.

Trudeau has been in the news in India recently after he supported the farmers’ protests in December drawing a sharp response from the Indian government. Foreign minister Jaishankar darkly warned of bilateral ties being affected. Trudeau government has also refused to heed Indian requests to act against Khalistani elements present in that country.

But at this moment Trudeau is facing internal pressure both for a slow rollout of Covid vaccines within Canada. Canada is also facing serious criticism for being the only G-7 country to take vaccines from the COVAX pool, which is mainly for low and middle-income countries.
By late 2020, Canada had sourced enough vaccines to give each of its citizens over four doses each. However, the slow rollout of both the Moderna and Pfizer vaccines have adversely affected the vaccination programs in Canada. Pfizer is struggling to supply both in the EU countries and North America. Consequently, Canada now has among the lowest rates of vaccination — at 2.38 per cent. Canada is scheduled to get 26 million doses from Moderna and Pfizer by April-May. But Trudeau now wants to get the Astra Zeneca ones from India. Canada has no domestic vaccine production capability.
An official press statement said, “Expressing his appreciation, Prime Minister Trudeau said that if the world managed to conquer Covid-19, it would be significant because of India’s tremendous pharmaceutical capacity, and Prime Minister Modi’s leadership in sharing this capacity with the world. Prime Minister thanked PM Trudeau for his sentiments.”